Published originally in 1914, this is the first Asian cookbook published in America. The fascinating new introduction by Asian cooking authority Jacqueline M. Newman reveals the trickery at play from the two sisters of Anglo-Chinese descent who wrote the book. The Chinese recipes are simple Chinese-American ones using ordinary ingredients. Many are for chop suey and chow mein using lots of celery, bean sprouts, and gravy. The Japanese meat and fish recipes are also simple even though several use rabbit, pheasant, venison, pigeon, even whale; the vegetable dishes are more Chinese than Japanese. Desserts straddle both cuisines. This book marks the beginning of the interest in Asian cuisine in America, and it is notable, almost 100 years later, to see the way authenticity had been edited for both the public and the author's purposes. 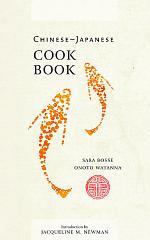 Authors: Onoto Watanna
Categories: Brand name products
In this book the authors make it possible to serve on home tables the food hitherto obtainable only at Chop Sueys and Mandarin Inns. They also introduce to us the best Japanese dishes and delicacies.Notice: This Book is published by Historical Books Limited (www.publicdomain.org.uk) as a Public Domain Book, if