THE YOUNG ENCHANTED A Story of Romance

Hugh Walpole was praised for this 1921 novel for his distinctively vivid characters and London setting. It was greeted as a welcome departure for the popular writer, being, part satire and part fairy-tale. In this novel, Young Henry Trenchard and his sister Millicent are ready to confront a post WWI world torn by rapid change and defined by conflicts with an older generation (it was even happening back then) represented by Sir Charles Duncombe. This novel was written in the inter-war period of the 1920’s and is set in London. During this period long established social norms were rapidly being broken down. Young men came back from the war demanding employment and change, not the least the reduction of the drinking age from 21 to 18. Their stand was “if we can die for our country at 18, then surely we should be allowed to order a pint of beer!” In addition during the war years (1914 to 1918) women were employed in large numbers in factories and offices and proved they could hold their own “in a man’s environment.” With more disposable income, they demanded more freedom (from their Victorian and Edwardian parents) as well as greater independence, which led to a period known as the “Roaring Twenties”. This period gave rise to the “Flappers” and novelty dances like the Breakaway and Charleston being born. A decade of prosperity and freedom was ended with the Lindy Hop and, of course, the Wall Street Crash of 1929. ================ ABOUT THE AUTHOR SIR HUGH SEYMOUR WALPOLE, a 20th-century English novelist, had a large and varied output. Between 1909 and 1941 he wrote thirty-six novels, five volumes of short stories, two original plays and three volumes of memoirs. His range included disturbing studies of the macabre, children's stories and historical fiction, most notably his "Herries" series, set in the Lake District. ================ KEYWORDS/TAGS: Young Enchanted, Hugh Walpole, fiction, novel, fairy tale, satire, London setting, Edwardian, flapper, Charleston, craze, Scarlet Feather, Henry Trenchard, sister, Millicent, Millie, First Day, Three Friends, High Summer, Second Phase, Action, Adventure, Peter, Letters, Cauldron, In Love, Duncombe, First Brush, Enemy, Romance, Cladgate, Life, Death, Mrs. Trenchard, Perfection, Return, Courage, Growth, Knight Errant, Mrs. Tenssen, Mrs. Westcott, Death, Battle, Recover, Breath, Worse Off, Clare, Rescue, Unknown Warrior, Beginning, roaring twenties, first world war, WWI, lindy hop, wall street crash, Charleston, 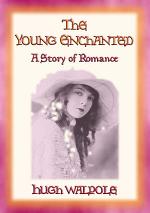 THE YOUNG ENCHANTED - A Story of Romance

Authors: HUGH SEYMOUR WALPOLE
Categories: Fiction
Hugh Walpole was praised for this 1921 novel for his distinctively vivid characters and London setting. It was greeted as a welcome departure for the popular writer, being, part satire and part fairy-tale. In this novel, Young Henry Trenchard and his sister Millicent are ready to confront a post WWI

The Young Enchanted; a Romantic Story

Authors: Hugh Walpole, Sir
Categories: Fiction
Unlike some other reproductions of classic texts (1) We have not used OCR(Optical Character Recognition), as this leads to bad quality books with introduced typos. (2) In books where there are images such as portraits, maps, sketches etc We have endeavoured to keep the quality of these images, so they 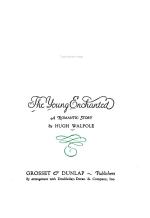 Authors: Hugh Walpole
Categories: Fiction
An attempt to find romance in the drabness of postwar England.The Young Enchanged is a book that takes the year 1920 and make it appear enchanged. London in 1920--and youth standing in the center of the present, with extraordinary possibilities whirling about it, ready and eager to grasp at these